In this article I will try to review all new network features. 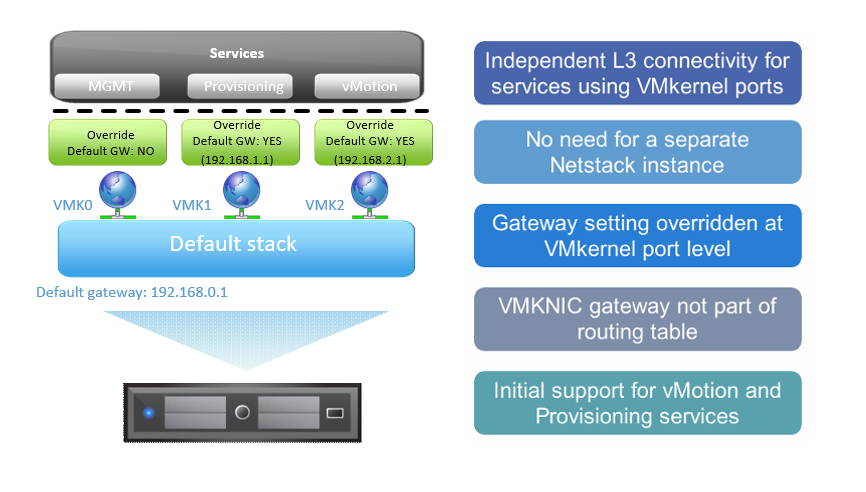 Before vSphere 6.5 there was only one default gateway allowed for all VMKernel ports in an ESXi host. vSphere features such as DRS , iSCSI, vMotion, etc. leverage  that use VMKERNEL ports are constrained by this limitation. Many of the VMKERNEL ports were not routable without the use of static routes unless they belonged to a subnet other than the one with the default gateway. These static routes had to be manually created and were hard to maintain.

vSphere 6.5 provides the capability to have separate  default Gateways for every VMKernel port. This simplifies management of VMKernel ports and eliminates the need for static routes.

Prior to vSphere 6.5, VMware services like DRS, iSCSI, vMotion & provisioning leverage a single gateway. This has been an impediment as one needed to  add static routes on all hosts to get around the problem. Managing these routes could be cumbersome process and not scalable.

vSphere 6.5 provides capabilities, where different services use different default gateways. It will make it easy for end users to consume these feature without the need to add static routes. vSphere 6.5 completely eliminates the need for static routes for all VMKernel based services making it simpler and more scalable.

ERSPAN mirrors traffic on one or more “source” ports and delivers the mirrored traffic to one or more “destination” ports on another switch. vSphere 6.5 includes support for the ERSPAN protocol.

vSphere 6.5 has data path improvements to handle heavy load. In order to process large numbers of packets, CPU needs to be performing optimally, in 6.5 ESXi hosts leverage CPU resources in order to maximize the packet rate of VMs.

Where are the improvements being made ?